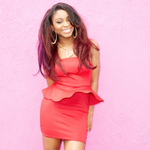 If you haven't pre-ordered Fifth Harmony's album, Reflection, get it on iTunes
or Amazon down below.