The song, "Down", was released to all major streaming services and digital platforms on June 2, 2017, as the lead single from the album. Commercially, it debuted at its peak position of number 42 on the Billboard Hot 100. It also reached top fifty in charts from others countries, including the UK, Ireland, Canada, France, Portugal and Slovakia. The accompanying music video for "Down" premiered on Fifth Harmony's Vevo channel on June 8, 2017. Directed by James Larese, the video contains a neon-inspired aesthetic intercepted with scenes where the group performs a choreographed dance. Its music video earned them their fourth Video Music Award at the 2017 ceremony for Best Pop Video. 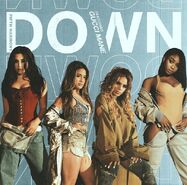 "He Like That"
Add a photo to this gallery

Retrieved from "https://fifthharmony.fandom.com/wiki/Fifth_Harmony_(album)?oldid=28870"
Community content is available under CC-BY-SA unless otherwise noted.